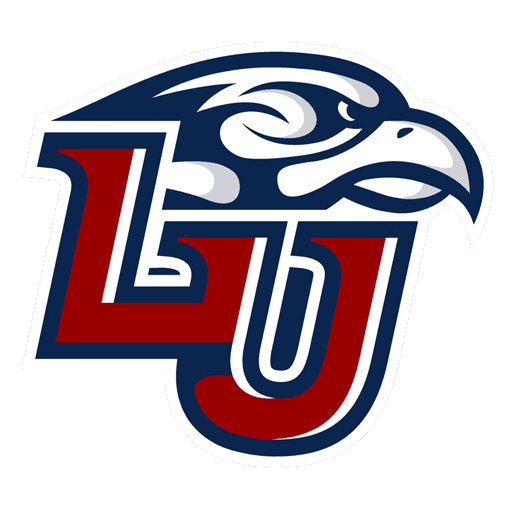 There I was again. Down on the floor, clutching my knee.

I knew exactly what happened. After all, I’ve been there before.

Last time, it took me nearly a year to overcome this dark pit of pain and agony. It was the one thing in life that nearly broke me.

Do I really have to do this again?!

I remember snapping out of my dream-like state and staring into the eyes of Coach McKay. I immediately knew what was up. There was no need for any sideline tests or high-tech medical gadgets to reveal the diagnosis.

It was the sort of gut-punch accident that made me question my entire basketball future before.

I just knew it, man. 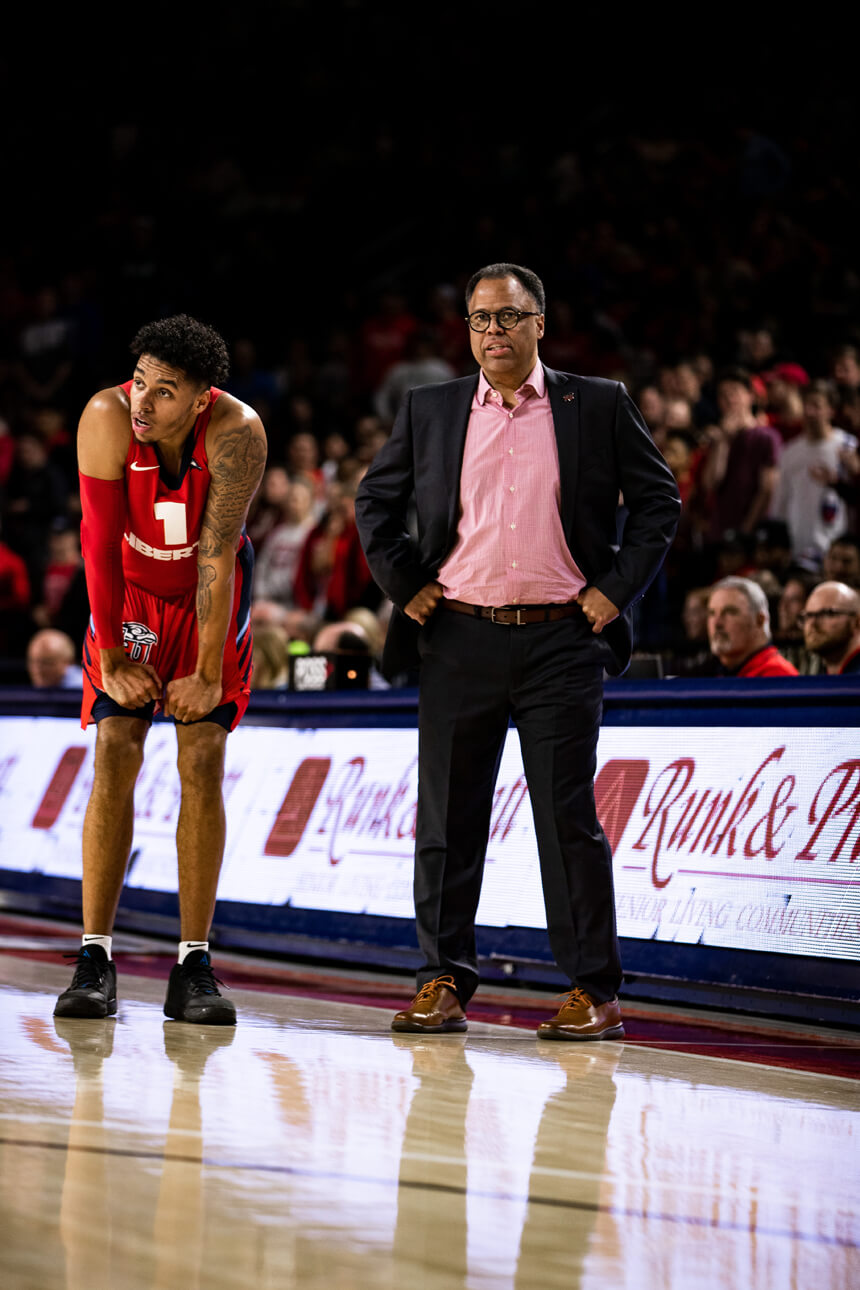 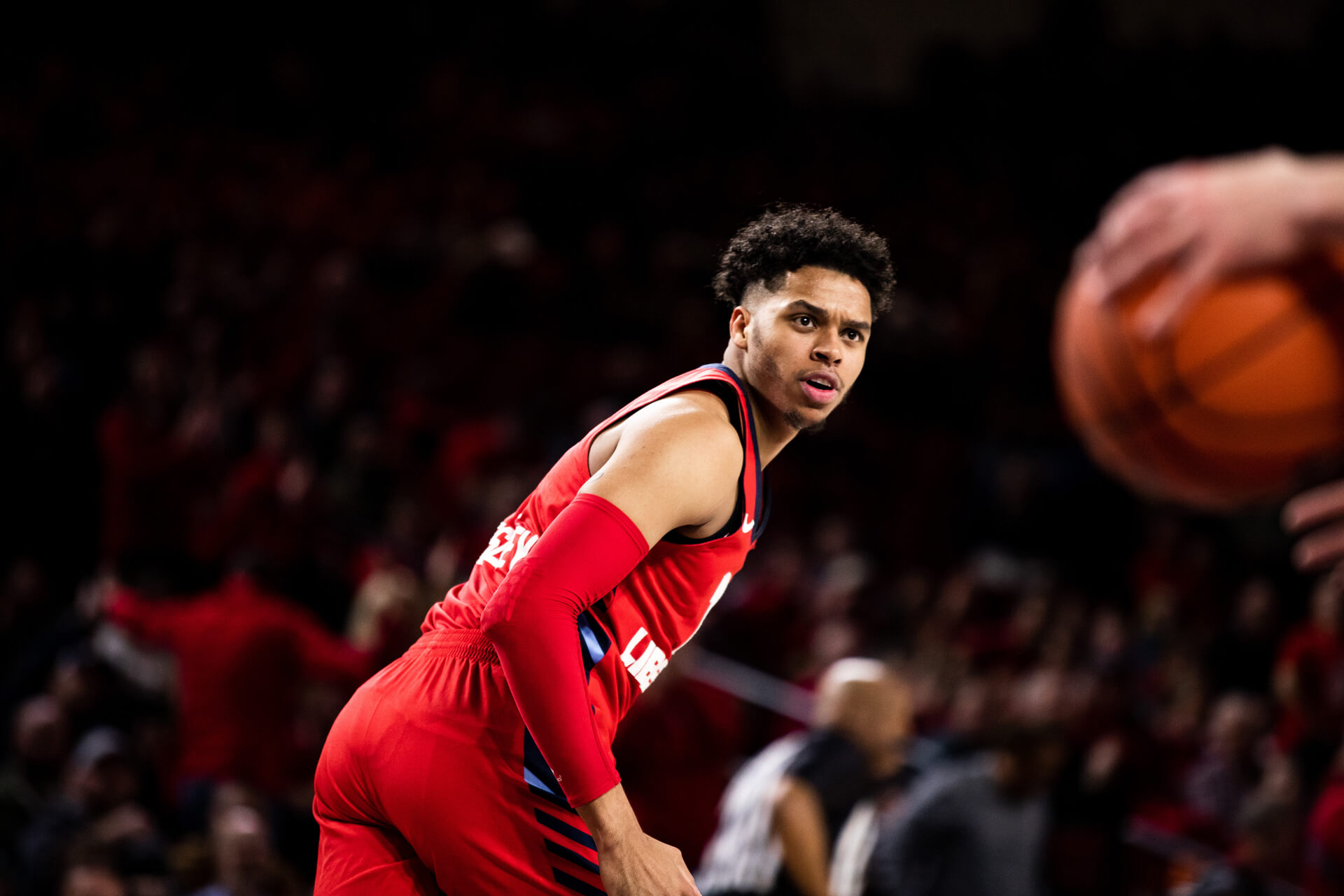 It was devasting, you know?! My whole life, I’ve chased after this basketball dream, and now, it all seems so far out of reach once again.

My journey started in my bedroom and my grandparents’ house with a six-foot tall hoop.

My dad introduced me to the sport at a young age, and I made it mandatory to knock down some baskets before I put my head on a pillow every night. It was a random ritual that brought me closer to the sport each and every single day.

However, it wasn’t until AAU basketball when I began to feel this competitive spark.

And just like that, the kid practicing lay-ups on a six-foot hoop before bedtime was suddenly college-bound with the school of his choice.

My decision wasn’t too hard, considering the effort Liberty put into recruiting me. Dale Layer was the coach for the team at the time, and he left no stone unturned in convincing me to sign.

There was a good connection there, and I felt like he had the sort of faith in me I needed to succeed at the next level.

I never actually got to play for him, but the groundwork he instilled on his way out ensured Liberty was still the best option for me. 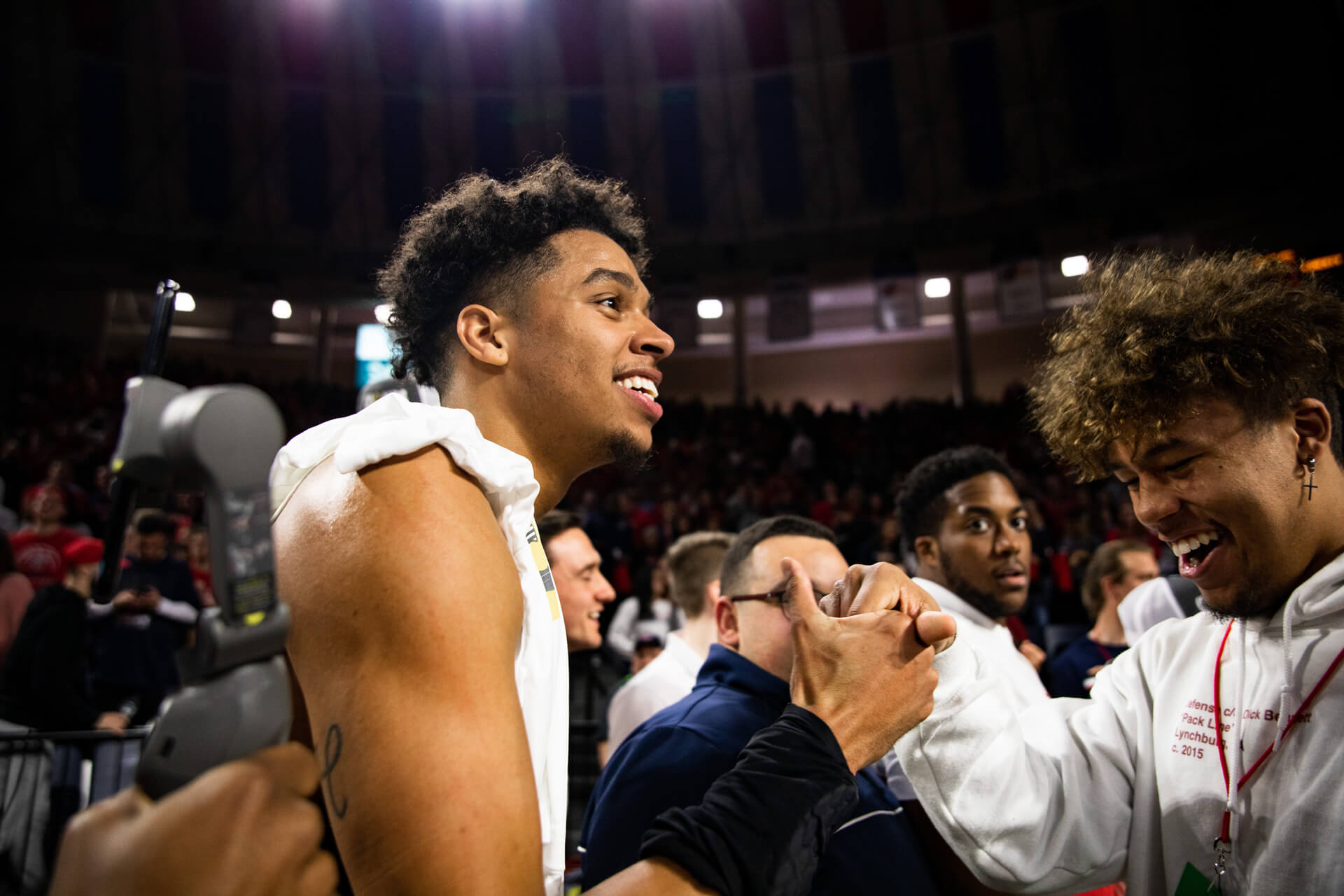 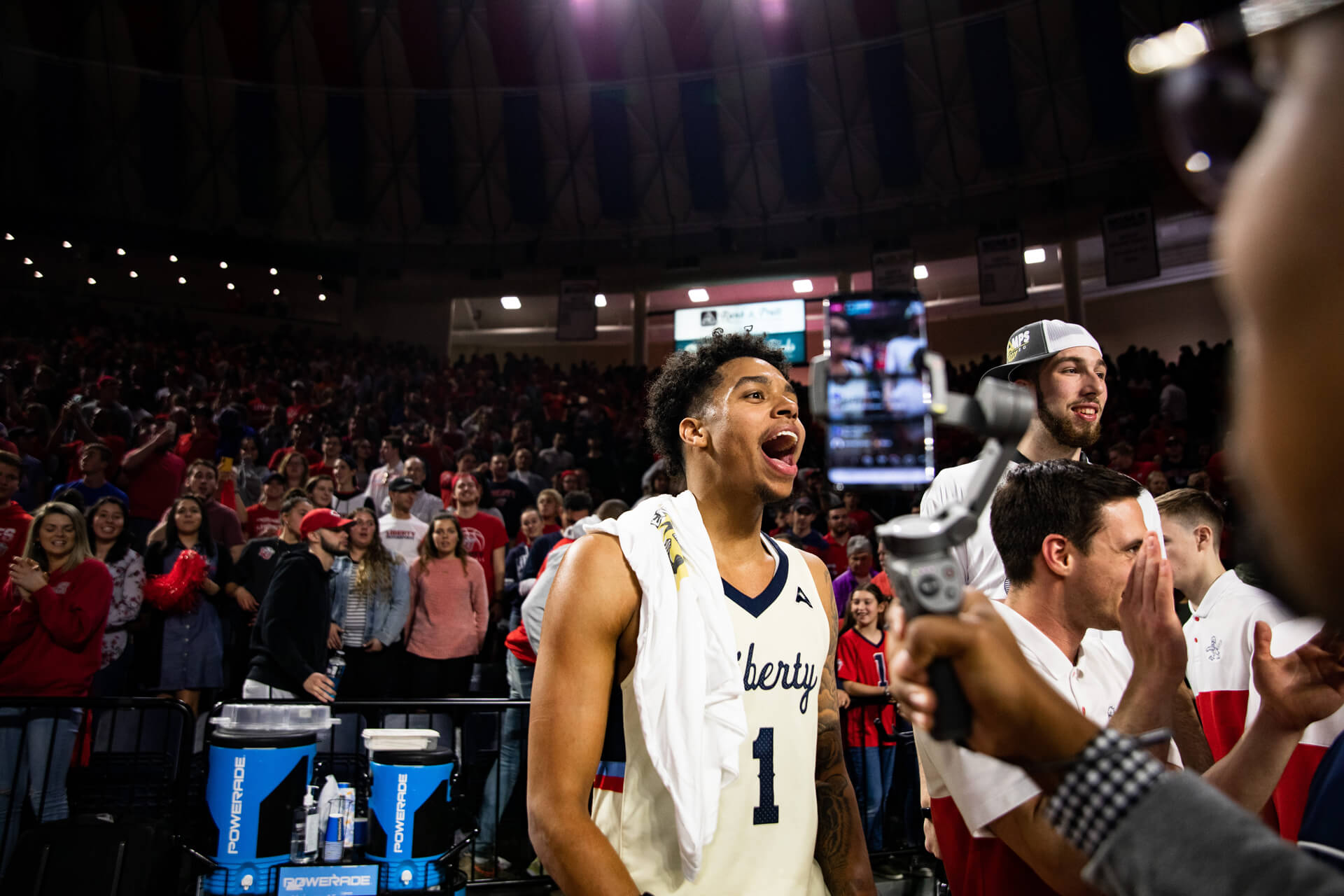 My First Brush With Fate

But not long after verbally committing to Liberty, I went through one of my worst experiences ever.

In my senior year of high school, I suffered a torn ACL and was forced to undergo surgery, followed by an intense rehabilitation process.

It was in the fourth quarter of a game, and I took an awkward step when reaching out to grab a ball thrown out ahead of me.

I’d never experienced a serious injury at the time, and it was a situation I really didn’t fully comprehend at first, to be honest.

It wasn’t long before an MRI revealed the catastrophic knee injury.

My senior season was in the books.

I can’t express the amount of worries and concerns that ran through my head.

No one knows this but once I got home after the MRI, I went to my room, and started crying. It was such a shock to me, you know?! And frankly, I just didn’t want my emotions to show. Well, now you all know.

My first real sigh of relief came when Liberty kept the offer on the table. They were willing to ride it out with me and get me into their program. So, before I ever wore the Liberty uniform, I knew that I had made the right decision. This meant a lot to me.

All I had left was the tall task of completing an exhausting rehabilitation process.

Whether I was stretching, completing rehab exercises, walking around on crutches, or simply sleeping, it was some of the most painful months of my life.

Of course, the strenuous rehabilitation was only part of the process.

When I finally returned to action, I was basically thrown into the fire of college basketball after sitting out games in my senior year of high school.

It was a completely new experience and Coach McKay had taken over as the head coach. Not to mention, I still wasn’t completely 100 percent back from my injury. My game wasn’t polished, and it showed in my inconsistent play on the floor.

In high school, I may have been somebody. But here, in college, I was a nobody, and I needed to prove myself first. It was an important learning lesson right from the start.

My first real sigh of relief came when Liberty kept the offer on the table. They were willing to ride it out with me and get me into their program. So, before I ever wore the Liberty uniform, I knew that I had made the right decision. This meant a lot to me.

When I finally started to get a bit of a groove going, well, you read the beginning of this story.

In a game against Princeton in my sophomore year, I went up to score, came down on my knee, and that was it – I tored my ACL again.

There was no wondering what happened this time. I was close enough to the disastrous ending of my high school career to take an accurate stab at the diagnosis.

But this time around, I was at a different environment. And two events from this environment would change me forever.

The first was my ability to finally anticipate the big picture. Coach McKay implored me to trust in God and believe in the process. There’s always a bigger picture to everything that happens, even if you can’t see it. To this day, I’ll never forget his words in that moment.

The second was an experience with my strength coach in the training room a few minutes after I went down in agony.

He asked me if I needed to cry because he could tell that I was trying to play it cool. But he also refused to let me dwell in that pity.

“We can cry if you need to cry, but after five minutes, the crying is over. We’ve got to get you into rehab and do what we have to do,” he told me.

Those words coming from him showed he cared as much as I did. He cared about me coming back as much as I wanted to come back.

After learning how to trust in God and his plans, and knowing that I have an entire team of friends, trainers, and coaches by my side, I was able to tackle the rehab successfully.

My mindset was very different this time around, and as much as everything sucked, having all of this support and these resources really helped with the process.

Everything worked out, fortunately, and I eventually made my return in my junior year.

I was finally beginning to play some of the best basketball in my career. And in my senior year, I even earned the Atlantic Sun Player of the Year and Atlantic Sun Tournament MVP award. 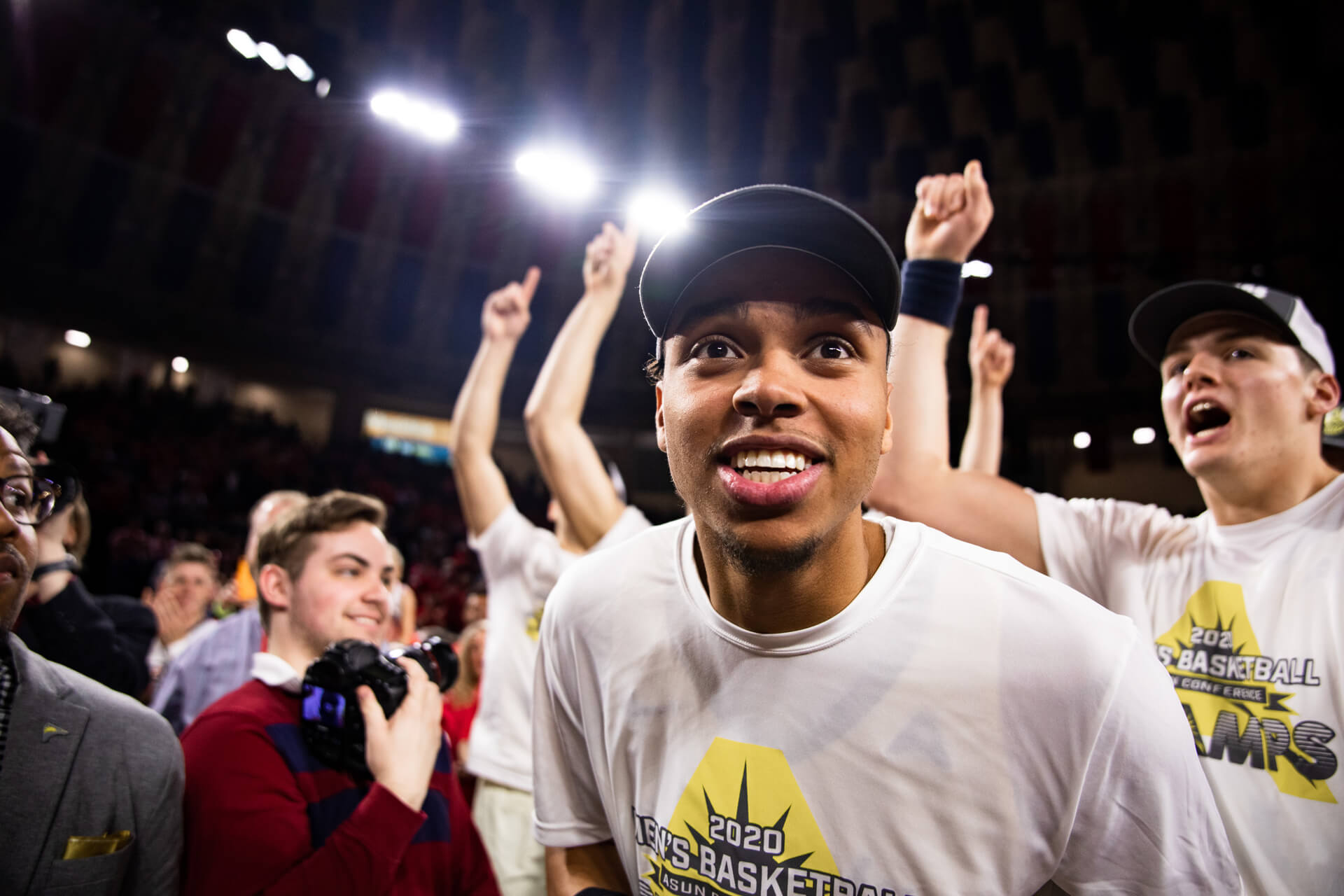 A Reason To Be Thankful

I was forced to look at the bigger picture once again after the Coronavirus pandemic ruined the end of the 2020 season.

Our team finished with a 30-4 record and was ready for its back-to-back March Madness experience.

Last year, we beat Mississippi State, a fifth seed, in the first round, and I had a career-best showing with 30 points.

The experience was priceless and our entire team was keen on repeating it.

But like for every other athlete around the country, it didn’t happen.

We found out about the tournament having been canceled through our coach.

He congratulated us on a great season and then apologized for the way it ended. I mean, what can a coach really say at that point, you know?!

Personally, I told myself that this wasn’t one of the worst things that’s ever happened to me. I felt like I took it a little different than other guys because I had basketball taken away from me twice.

I knew I’d get to wake up one day and play ball again. Something I wasn’t so sure of after my two ACL surgeries.

I took it as a peace almost because basketball wasn’t taken away from me.

I’d get to walk away and continue on my path towards pursuing my dreams of playing professionally.

That doesn’t mean I didn’t feel bad for the other guys on the team by any means. My heart breaks for them more so than myself in these unprecedented times.

But, I also really feel like God is trying to tell us something here.

Whether he’s giving us a chance to slow down and be with our loved ones, or simply wants us to pay more attention to caring for and loving one another.

Maybe the world needs to shift a little bit.

That sort of thinking is a bit strange coming from me, but so much has changed since I came to Liberty.

My strength coaches, trainers, teammates and family—I feel like everyone brought me back out of the deep, dark pit.

After all, I’m a strong believer that everything happens for a reason. 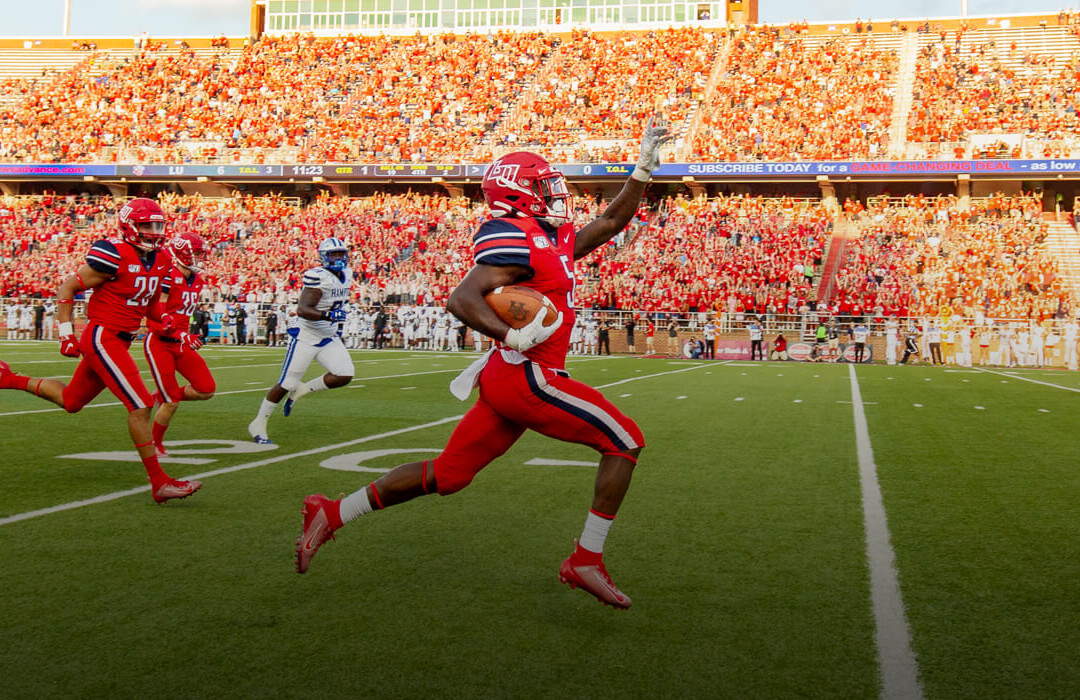 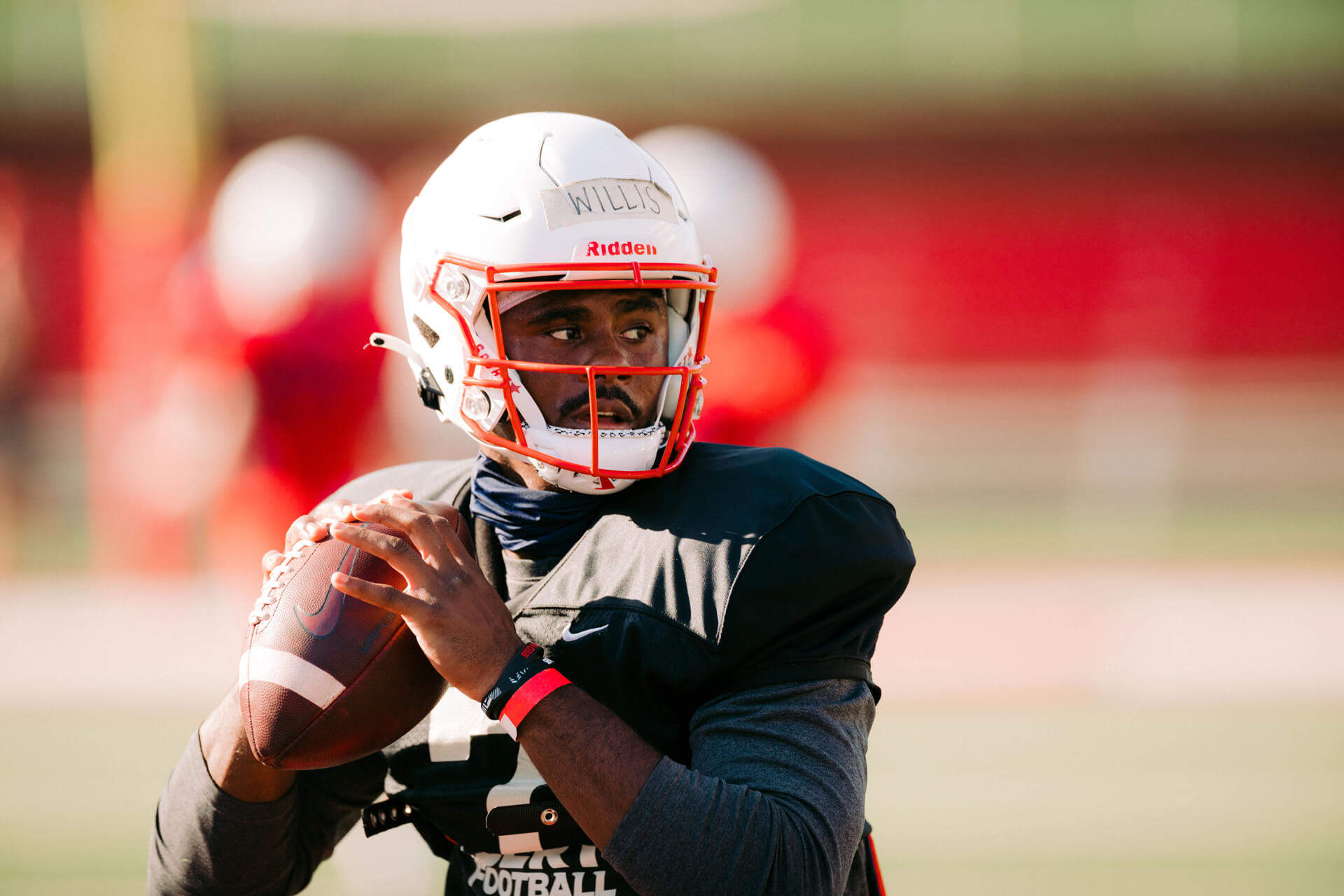 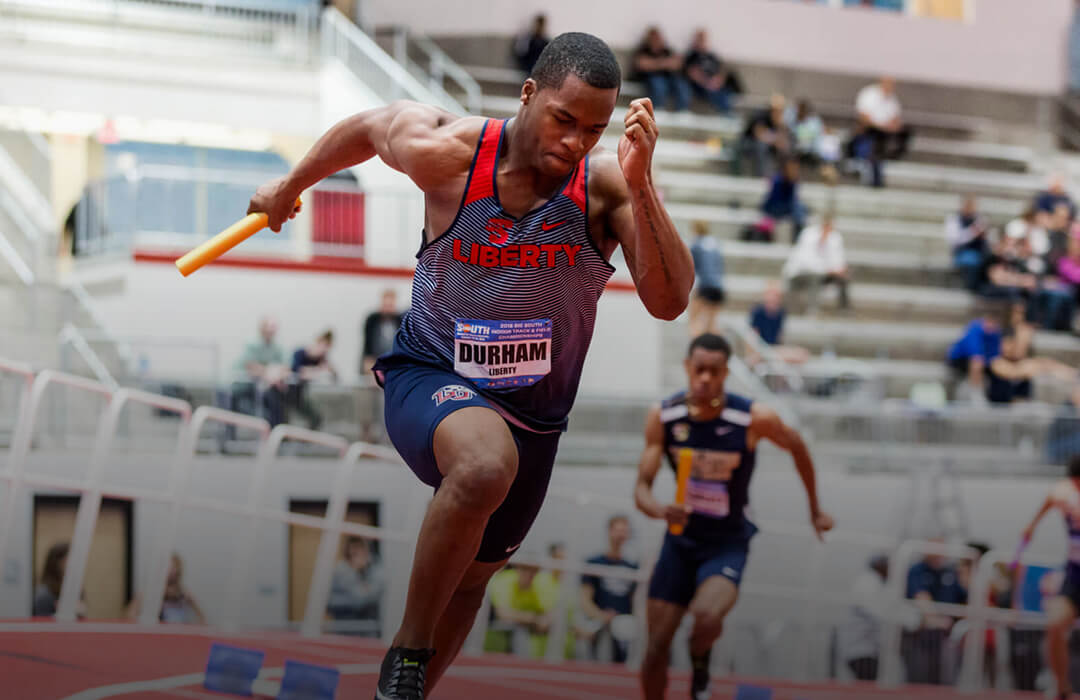 Support From All Around